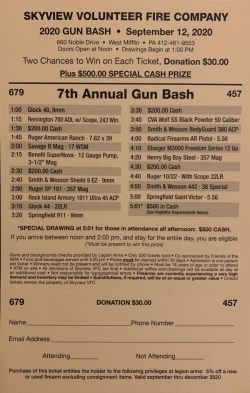 Skyview VFC will be holding their Fall Craft Show on May 18, 2019 from 10am-4pm. Interested in obtaining a table for your crafts? Email us...So your not a Crafter, just come out and support our local...
➜
About us

By 1964 a couple hundred homes were built in the vicinity north of the Allegheny County Airport along Route 885. This plan of homes was named Skyview Terrace. A group of interested citizens from this community believed they should have a fire company for protection and a hall for community activity. On March 12,1964 a meeting was held at Kenny Proud's home on Irwin Run Road and those that were there, decided to organize a Fire Company. During May and June of 1965 a membership drive was conducted which resulted in 108 men signing membership cards. The first recorded minutes of July 1965, listed the following officers: President—Kenneth Proud, Vice President—Charles White, Secretary—Donald Angelletti, Treasurer—Harry Thompson, Trustees were: Ellsworth Darr, Robert Berger, Robert Wonderly, and Al Chiappinni as Chief. Meetings were held in the homes of various members. The use of Borland Elementary was later obtained for meetings. Charter applications for the Skyview Volunteer Fire Company, West Mifflin #4, was filed in the courts on October 28, 1965. In December 1965, West Mifflin council was requested to purchase a fire truck to service the Skyview area. Present at the January 1966 meeting, were members of the disbanded Skyview Civic Association who presented the Fire Company a check of $1,200.00 to be used for the continued operation of the Fire Company. February 3, 1966 at the Borland School, members of the West Mifflin council formally presented the official charter to the company. Accepting the charter the executive officers and members pledged their service to the protection of the community.

After the ceremonies, a buffet luncheon was served by the cafeteria workers of the Borland School. Through the efforts of the West Mifflin council and many civic-minded people, ground was obtained on Noble road for the construction of a fire hall and community building. March 1966, plans were presented for what was to be the Skyview Fire Hall. Plans were approved and finances arranged. Ground was broken on July 8, 1966. Much labor and dedication went into the next several months and finally on January 30,1967, the first meeting was held in the new firehall. A significant item of business transacted at this meeting. The members approved of the formation of the Ladies Auxiliary of the Skyview Fire Company #4. In May of 1967, the members took receipt of a brand new Mack Pumper. Now along with the work of finishing the building... training.

We would like to thank the Borough of West Mifflin and the community of Skyview for all their support throughout the years. 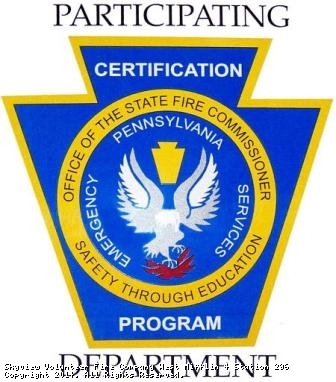 This site has been viewed 190,579 times.
Calls
News
Events
Pictures
Apparatus
Maintained by the members and staff of Skyview Volunteer Fire Company West Mifflin #4 Station 296. Designated trademarks and brands are the property of their respective owners. Copyright © 2006-2022. YourFirstDue Inc. All Rights Reserved. Content on this web site is supplied by Skyview Volunteer Fire Company West Mifflin #4 Station 296. YourFirstDue Inc. cannot be held responsible or liable for any content, text, pictures, or any other media found on this web site.
Management login
Powered by